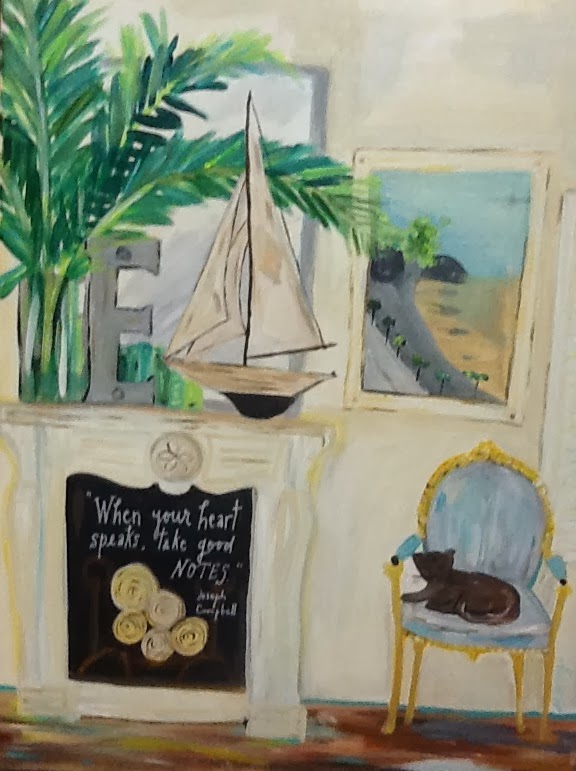 Something I have grown to love about painting is that often what you think you’re going to produce, create, hope for is not at all what shows up on the canvas. The palette might resemble what you wanted or the focal point is still there or…or not at all. This was the case with “E”.

I enthusiastically embarked on this series A-Z with some “XO’ to boot, and somehow stopped, skidded to a halt at letter D then had a renewed purpose when I received a commission for the letter H (is for Harmony). I had presumed that I would paint them in order but tick tock the time kept passing and i realized if I wanted to complete E, F and G before I delivered Patty’s H, she would be receiving it next year! So I did what is uncomfortable but I’m leaning into the change. I audited and adjusted “the plan”, went ahead and painted hers and rather than give up the project, I’m rededicated to it. This is something I learned with the 100 Paintings. The keep-going-ness of creativity & how it really doesn’t matter how you get there & plans are clearly made to be adjusted. So what if I didn’t do them in order…but I’m doing them. And that is revolutionary. To commit to a project, see it through, embrace changes & let go of the results. Sounds like life. xo

Art & business & following your heart have always been my dream equation. I offer you greeting cards & paper goods made with so much love, a happy paintbrush & lots of laughter in the background. Read More…

Hi, there! Get a FREE digital print of one of my paintings! Xo

Thank you for popping in to Carpe Diem Papers. I'd love to stay in touch! Please sign in the magic square if you would like to as well. You'll see the link to your free print file in the confirmation after you subscribe.

Thanks for subscribing! Here's the link to your free digital print.